Install TuskBot on your discord server

You can choose to add the Manage Roles permission at any time and TuskBot will go to work adding these roles and assigning them to players upon execution of !register or !ranks.

Please note: The Tusk role needs to be placed above any role it’s trying to modify.

If the Manage Roles permission is granted: TuskBot will create 19 rank roles. These will be named:

Then: every time a !register or !ranks is executed, that player will be automatically assigned the role of their highest rank.

If the Manage Roles permission is granted: TuskBot will create 10 regional roles named:

Then: every time [region] is included in a !register, that player will be automatically assigned the role of their region.

Server owners (or users with the role tusk_admin) can choose to disable the creation and assignment of regional roles with !disable_region_roles. If later you’d like to turn them back on, simply execute !enable_region_roles.

If the Manage Roles permission is granted: TuskBot will create 4 platform roles named:

Then: every time a !register is executed, that player will automatically be assigned the role of their registered platform.

If the Manage Nicknames permission is granted: every time a [region] is included in a !register, that player will have that region prefix added to their server Nickname, wrapped in brackets, such as [USW].

Server owners (or users with the role tusk_admin) can choose to disable the assignment of regional prefixes to server Nicknames with !disable_region_roles. If later you’d like to turn them back on, simply execute !enable_region_roles.

Note: Due to Discord permissions, Tusk can’t change the Nickname of server Owners and Administrators.

Once the bot is installed, you can type !help to see a list of all possible commands.

Most commands won’t work unless you have registered your Rocket League account first:

Both <account-id> and <platform> are required.

If your <account-id> has spaces in it, wrap it in quotes:

[region] is optional. If you include a [region] when registering:

For example, if I registered with: !register jubishop steam USW and my nickname was jubishop, it’d become [USW] jubishop and I’d be given the role USW.

Server owners (or users with the role tusk_admin) can register people other than themselves. The command is !admin_register, and the first param becomes a mention of the discord user to register.

Server owners (or users with the role tusk_admin) can also update the rank role of every registered user in the channel with !update_all_roles. 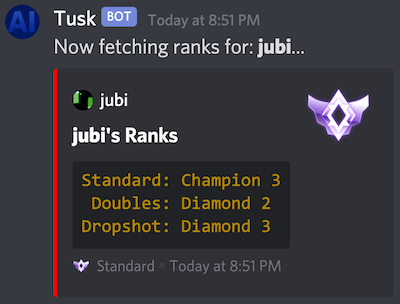 There are 2 commands for getting stats from ballchasing.com

The !series command provides a way to view stats for the specific games where all the given players were playing together. This makes for much more interesting comparisons. 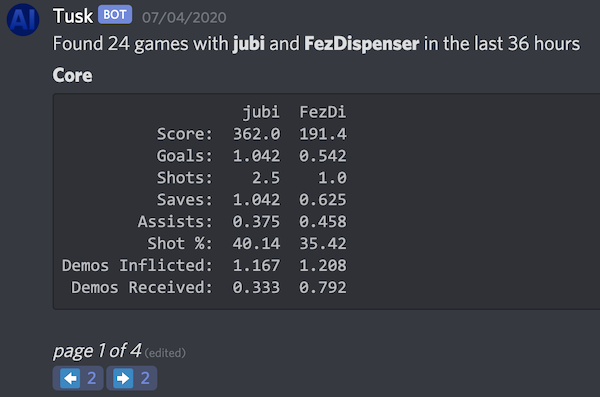 Every time a !series command is executed, TuskBot stores those replays in its own database. The !alltime command uses those stored replays to show you the aggregate data of all the !series commands you’ve ever run. So as long as you execute a !series command every 72 hours, you’ll be able to use !alltime to get the complete stats of every game played since you began using TuskBot.

By default, all playlists are considered when assigning roles based on rank. Server owners (or users with the role tusk_admin) can narrow this selection to any set of playlists they prefer using !playlists. Playlist names are identified as:

List the playlists you care about with a | between each one. For example, if you want to only assign roles based on the ranks in the doubles, standard, and tournament playlists:

If you run !playlists with no parameters, it’ll show you what playlists are currently being used.

If you want to go back to the default, run !clear_playlists.

By default, TuskBot will accept commands when you address it directly via @Tusk or prefix your command with !. Server owners can change this with !set_command_prefix. To change it to @:

Now all commands will begin with @. If you wanted to change it back to !:

If you ever forget what your command prefix is, you can address @Tusk directly to find out:

Use the !help command to learn about simple commands to get URLs to specific player pages on ballchasing.com, rocketleague.tracker.network, etc.

Try it out before installing

You’re welcome to join the server where TuskBot was developed and try it out for yourself.

Feel free to file issues on github or to hit me up in my discord channel, I’m @jubi.